Genre: Industrial / Pop
Place of purchase: Slow Boat Records, Wellington
Why I bought this: Searching for the avant-garde

German industrial noisemakers Einsturzende Neubauten carry a formidable reputation for extremism. So why is this record so boring? Opener Ich Gehe Jetzt makes for a magnificently droll and moody beginning, as if Welsh popsters Young Marble Giants had grown up in a steel factory rather than a coalmine. But over time, the marriage of industrial materials with 'songs' on Perpetuum Mobile sounds too deliberate. The record is bogged down by the consistently low/mid-paced tempo, and Blixa Bargeld's vocals methodically. spell. out. each. word. The cd itself is magnificently packaged with the lyrics in German and English, colour pictures of the group and a double cd-sized package; but somehow, like the music, it's all too formal, too designed.

While some Neubauten traditionalists no doubt wish their heroes were back to their roots sawing bridges in half, I suggest a more radical step; the West End.

Neubauten - The Musical begins with a pantomine Zorro tip-toeing round a corner, putting his finger to his lips, looking at the audience and going Sssshhh! Pretty soon, lone Panto-Zorro is joined onstage by 30 more Panto-Zorro's, all walking round corners and going Sssshhh! Then Blixa Bargeld is lowered from the ceiling in one of those hanging 70s wicker chairs with a giant oversized book in his lap, kind of like a gothic Ronnie Corbett. Just as BB raises his finger to go Ssshh! the rope breaks and he falls through a trapdoor into a cellar. The 30 Panto-Zorro's pause. After about 15 seconds we hear Blixa Corbett go Sssshhh! from his cellar, and off go the Panto Zorro's, walking round corners, etc...

Genre: Classical
Place of purchase: Wellington Public Library sale
Why I bought this: Attempting to 'get' Classical

Wouldn't it be fantastic to enjoy classical music? (Ba-Dom-Tsh!!!)

Well, I think so... just the record collector in me gets all hot 'n bothered thinking of all those 2nd hand LP's in the sale bins, and all going dirt cheap because the owners have switched allegiances to Rare Groove.

But what do I know? I've been too lazy to get around to listening to the small Classical collection I have. Listening to Mr Shostakovich now, an avalanche of surface scratches, crackling and pop make it virtually unlistenable. I fear my entry into the Classical world is to be further delayed.

My reluctance to play this LP over the years may be explained by a distant memory of a sleepwalking flatmate pissing in the fireplace next to it. No doubt it's much-loved past this contributed to it's 'withdrawn' status from the Wellington Public Library. Either that or someone pissed on it there, too.

Genre: Pop
Place of purchase: Salvation Army Thrift Shop
Why I bought this: The title

Unfortunately the Bear in question is USSR President Khrushchev on a visit to the USA. "Big Bear go back and tell them that all our people are free". I just wanted a song about a flying bear. Is that too much to ask? In it's favour, Jimmie's video takes an impressively literal approach to evoking the reality of life behind the Iron Curtain. 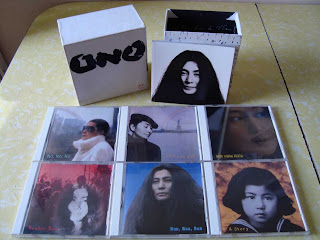 YOKO ONO - ONOBOX (CD, 1992)
Genre: Rock-Avant
Place of Purchase: Defunct Record Store, Wellington
Why I bought this: I didn't - it was a gift in lieu of cash

Most of you know the Yoko Ono story; how she drowned the Rolling Stone's Brian Jones, invented Glad Wrap and most heinously of all, foisted avant-garde-ism on The Monkees. Yes, that Yoko Ono.

The Onobox has been in my possession since 1997. In 14 years of ownership I havn't made it through one of the 6 cd's. It includes a deluxe colour book and a coupon with the special offer of ... an 'Onobox Ultracase'. ; a metal container in which you can store your Onobox.

What's more, the Onobox Ultracase includes a 'best of Yoko' compilation and ahem, one of Yoko's limited edition glass sculptures.

Now, first of all, I'm not sure I really give a hoot about Yoko's glasswork. Likewise her knitting or play-dough modelling. Secondly, having bought 6 cd's of Onobox I'd be mighty peeved if the folks at Rykodisk left the 'best' tracks off.
Finally, for what possible purpose would I need to encase my Onobox in metal? Perhaps if I took it ... underwater? Or to the beach? Iraq?

For me the best moments are on Why? where John Lennon, Ringo Starr and bass player Klaus Voorman kick out a monstrously rockin improv groove for 9 minutes over which Yoko screams like a banshee. Walking on Thin Ice and Every Man Has A Woman Who Loves Him are pretty cool disco grooves. Other tracks from the Double Fantasy period (O Sanity, Yes I'm Your Angel) are weird 2 minute pop excursions but ... oh, let's cut to the chase.

If there's one recurring theme in this box of 6 cd's, it's PAIN.

Now it's perhaps natural that someone who grew up in World War 2, had her husband murdered, and was generally hated for pushing Monkee Davy Jones to debut his microtonal field recordings at Woodstock should feel somewhat... aggrieved.

But Onobox just wears me down. Lyrically, her reflections on men, war, women are awkward, labourious and if anything are better suited to 1 disk.

Bizarrely, the Rykodisc press release described Onobox; "Not as bad as you might think". With that sort of endorsement one wonders if Onobox was some sort of trade-off for Yoko's home recordings of John Lennon singing in the shower (with extra bass and drums to be added by Paul and Ringo, just in time for the Xmas market, of course...)

I have decided to sell this box. I'm sorry Yoko. But for the first time since I began listening to this music, I feel happy.

Online Surveys & Market Research
Posted by mark_williams_1 at 12:44 AM 3 comments: